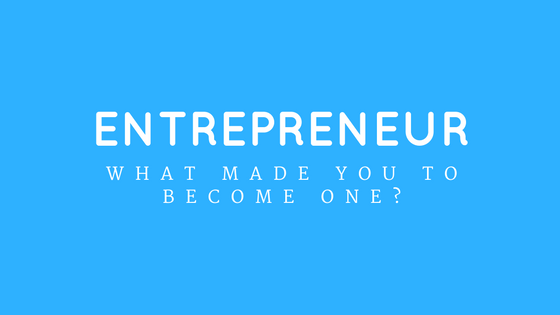 Why does one become an entrepreneur? Forced by drive.

Why does one become an entrepreneur? The answer is: out of passion and drive so forcing, you have no other option than just to go for it and hold for your dear life.

Soon 7 years ago, I became an entrepreneur. I changed the secure, well paying job with great colleagues and leaders into a many years of lonely struggle and lost sleep over finances. But I have not regretted a day.

A few months back, it was the 4th anniversary of my second company.

Why does one become an entrepreneur?

A couple of years before I became an entrepreneur, I was at a seminar listening to this lady entrepreneur. I cannot remember anything else from her speech apart from her telling us she became an entrepreneur, because she felt she knew better than her boss. It made me laugh, because I recognized myself. And it wasn’t so much about really knowing more than your boss, than about thinking that you do. Because that’s what entrepreneurs tend to be like: head strong and full with purpose and opinions.

I dreamed about entrepreneurship for years before I finally took the step. So much so, that in 2006 I was already doing market analysis on the potential of setting up an employer branding business in Finland. Looking back, I’m so glad I didn’t do it then. The time was most definitely not right for that, in Finland! I was saved – not by the bell, but by my former employer who hired me instead. He gave me, not only a dream job in HR, but also the best workplace and a truly inspiring example of entrepreneurship. During one of the job interviews he asked me which book I last read. It was a book about entrepreneurship. I told him, if I get that job, I will only leave it to set up my own company.

Then the day came.

I became an entrepreneur, because I needed to solve a problem no one seemed to have solved before.

How I started as an entrepreneur

During those years in my previous job, I became face to face with a hiring problem. This was a business problem to our company, because this company was growing very fast and we were short of talent.

The challenge was, we only hired very smart people with the right attitude fitting the company culture. But we were not yet attractive or known enough as an employer, especially outside Finland, so we were having a lot of difficulties to find the right people. The service providers just did not understand what we were after and kept showing us talent with experience they thought was interesting to us.

I kept thinking, if there only was a service where I could search for the right “types” of talent and contact them myself, I will be able to sell the deal to them.  But there were none. No service providers, no sites, no services focusing on this area, company culture based hiring.

Then I got pregnant. Ta-daa!

Here in Finland, we have the opportunity to stay home with the baby for a whole year before it really affects our income. I had a lot of time on my hands, because the baby was sleeping all through the day and the hormones kept me awake all day, every day. So I went onto prepare for my business idea.

Jumping on the entrepreneurial bandwagon

Year 2009 was a beautiful year in Helsinki, Finland. The sun started to shine about end of March, just when my baby was old enough to be taken out for winterly strolls. And the sun kept on shining until the very end of November. I’ve never been so tanned – on my face and wrists as I was pushing the baby around the woods in the sun all day, every day.

It’s amazing what sun and oxygen does to your brain. The idea started to generate and grow in my head, and by summer I was ready to start writing it down into a business plan. By end of the year things had proceeded far enough for me to start taking actions on it. My idea had turned into a software development business, a proper startup.

First I had to resign from my job. That was hard. I truly loved working there. But this force was pushing me. I just had to move on. It was time.

I handed in my notice in January 2010, put the business papers in and got the company officially established on the 16th February. On the1st of March, 2010 my little baby started in the nursery – as I started in my own entrepreneurial nursery.

So why does one become an entrepreneur?  You have an idea, the idea takes over and then the force pushes you to take action on it. That’s how one becomes an entrepreneur. It’s all about emotions. There’s not a lot of sense in it, I find. The first time around.

I was a bit wiser the second time around. But that calls for another story.

Here's an idea for fast scaling #growthcompanies: ditch your Fun at Work #culture for the #strategiccompanyculture. Going 😧? Check out this episode & the blog post on my Building a Modern Employer Brand #podcast. #employerbranding #modernemployerbrand #companyculture

#Instagram continues to be the best social media for #employerbranding specifically. In this episode of my #podcast, I talk about new features I think are going to add value to all of your talent marketing on Instagram. 🔗 https://buff.ly/3HKNzlS ⏱ 16:56 min. #talentmarketing

Lots of #buzzwords to clarify in #marketingscommunications. Tune into this episode of the #buildingamodernemployerbrand #podcast 🔗 https://buff.ly/3qgHVS6 for the key differences between #communications #marketing #advertising in the context of #employerbranding #talentmarketing